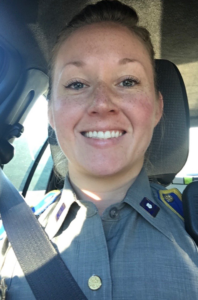 Kazimera (“Kaz”) has been a Trooper with the Connecticut State Police for 5 and a half years. Kaz has run a half marathon, a 95-mile relay, and many 5Ks, but this will be her first marathon!

Though she lives in Connecticut now, she’s a Massachusetts girl at heart! Born and raised in MA, Kaz watched the Boston Marathon on TV just about every year on Patriot’s Day. She decided that if she ever ran a marathon, Boston would be the one. To make her dream an even more special reality, she is honored to be running for Cops For Kids With Cancer. 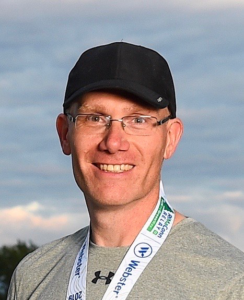 LT. Marc Petruzzi has been with CSP for twenty years, having served in Patrol, as a Resident Trooper, in the Office of Administrative Services, and as Commanding Officer of two State Police Troops. He started running in 2015 and while he has completed several half-marathons, the 2020 Boston Marathon will be his first full. Having lost his younger sister to pancreatic cancer in 2016, Marc is keenly aware of the devastating effects this disease has on not only its victims, but the suffering and stress it brings to their families. Cops for Kids With Cancer’s efforts makes this struggle slightly more bearable for families who are facing this challenge. 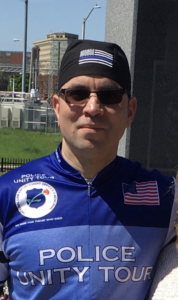 Edgardo (“Ed”) always had an imaginary goal to one day be able to run in the Boston Marathon. Well, here it is! Ed feels extremely pumped up to have the opportunity to join such a great event, in an effort to raise awareness and funding for Cops for Kids With Cancer.

Ed has participated in and completed multiple marathons, cycling events and triathlon races, including an Ironman in Frankfurt, Germany in 2017. Like the Ironman motto states, “Anything is possible”. So let’s make this possible, by helping Ed raise donations and gain support for this awesome charity, Cops For Kids With Cancer.

Help support Ed and his CSP team to conquer their fundraising goal! From Ed: “Thank you in advance for your support, and may God bless the families and precious children suffering from cancer. Let’s do this for them!!!”

Kelly began running in 2005 after accepting the challenge to raise money for a charity AND complete an Olympic distance triathlon. Kelly met that challenge by raising nearly $10,000 for the Leukemia & Lymphoma Society in honor of a co-worker’s recently-diagnosed young son.

What was supposed to be a “one-shot deal” 15 years ago, turned into 20 half marathons and 5 marathons, including running a half marathon in both Greenland (Arctic) and Antarctica.

Despite having run in well-below freezing temps, in less than ideal conditions, Kelly will face her biggest challenge when she runs the Boston Marathon for the first time.

Kelly has been a dedicated law enforcement officer for 24 years, 19 as a Connecticut State Trooper, who continues her lifetime of service to others by running the Boston Marathon for Cops for Kids with Cancer. 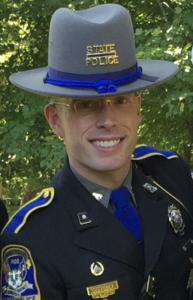 Mark recently began his fourteenth year as a Connecticut State Trooper, having served on Patrol, as a Detective in two different specialized units, and currently as a Resident Trooper. He is also the Coordinator for the CSP Honor Guard. Mark has completed multiple 5k’s, 10k’s, and half marathons. He has also completed 4 marathons, a nearly 200-mile Ragnar relay, and, most recently, 2 Ironman 70.3 triathlons in 2019 – with more races scheduled for 2020!

In 2015, Mark and another Trooper raised funds for Cops For Kids With Cancer and ran the Boston Marathon. The experience was overwhelmingly rewarding, and the Troopers were humbled to assist the charity in donating funds to a CT child in need. These experiences would not have been possible without the help of late Massachusetts State Trooper and CFKWC Board Member, Billy Coulter. Over the years, Billy had helped several Connecticut State Troopers achieve their dreams of running the Boston Marathon, and his legacy will never be forgotten. Mark attended Billy’s funeral late last year with another Trooper, and vowed at that time to assemble a CSP team to raise funds and run in Billy’s honor.

Please help Mark and his CSP teammates to raise as much money as possible for the kids benefiting from CFKWC, in honor of the great Billy Coulter! From Mark: “I’m humbled to again raise funds to help these brave, strong, amazing kids! Please help us crush our goal!”

Kaz, we will be with you in spirit!