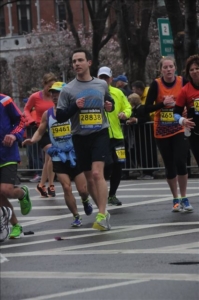 I am honored to be running my ninth consecutive Boston Marathon with the Massachusetts State Police Marathon Team. This year the MSP team will continue to raise money for Cops for Kids with Cancer, a charitable organization focused on raising funds to provide assistance to families of children fighting cancer. Families typically receive $5,000 from the charity to remove some financial burden so all their energies can go to helping their child beat cancer and live a healthy life. I encourage you to visit the Cops for Kids with Cancer website to observe the several photographs of families receiving financial assistance from this great charity.

This year I will be running in memory of friends who passed away in 2019. Joe Quinlan died in August 2019 at age sixty-one, after battling cancer. Joe was a former veteran prosecutor in Massachusetts and New Hampshire. The Honorable William Boyle died in September 2019 at age sixty-two, after battling ALS. Judge Boyle was the former first justice of Springfield District Court, an avid runner, and completed several Boston Marathons before being diagnosed with ALS. I also run to honor the memory of my good friend, Detective Lieutenant Bill “Ironman” Coulter who died in September 2019 at age sixty-eight. Bill served as a Massachusetts State Trooper for forty-five years, Chairman of Cops for Kids with Cancer, and was a cancer survivor. Bill also completed thirty-six consecutive Boston Marathons, several Ironman Triathlons, and 150 marathons. Over the course of several years, under Bill’s leadership, MSP Marathon Team members have raised thousands of dollars for Cops for Kids with Cancer. I will always remember Bill for his friendly personality and the charitable work that he accomplished throughout his life.

My goal is to raise at least $1,000 for Cops for Kids with Cancer. I respectively request that you consider making a donation to this wonderful charity. I also appreciate and recognize that over several years you have supported my efforts to raise money for Cops for Kids with Cancer. Any donation that you can contribute this year will continue to be received with sincere appreciation.

We admire your dedication to supporting this important cause.