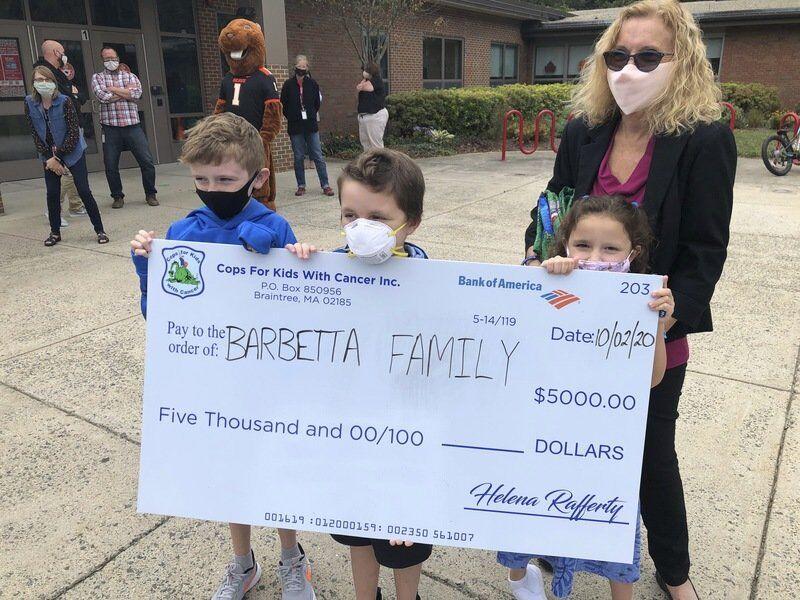 BEVERLY — When Michael Barbetta got home from Centerville Elementary School one day last November, Ann Kent noticed a black-and-blue mark on his back.

Being the grandmother of an active boy, Kent didn’t think much of the bruise at first. But it turned out to be the first sign of what was eventually diagnosed as leukemia in the 8-year-old boy nicknamed ‘Mighty Mick.’

“It was a devastating event, as you can image,” said Kent, who is Michael’s legal guardian.

Michael was back at Centerville School on Friday, and this time it was nothing but good news. He and his family were presented a $5,000 check from Cops for Kids with Cancer, a Boston-area charity that provides assistance to families of children fighting cancer.

The organization responded after Beverly Police Officer Tim Mezza, the department’s school resource officer, filled out an application on behalf of the family. Mezza learned of the boy’s situation from his wife, Centerville School teacher Christine Mezza.

Before the check presentation, the now 9-year-old Michael and his family were treated to a motorcade of police cars, fire trucks, and cars. At one point, Centerville third-grader Madeline St. Pierre, a previous recipient of a Cops for Kids with Cancer donation, jumped out of her car and handed Michael a gift bag filled with candy, T-shirts, and pop tarts.

Peabody police Sgt. James Harkins, a member of Cops for Kids with Cancer, said many people overlook the financial burdens placed on families of children who are diagnosed with cancer.

“Although it’s not much, we hope this $5,000 can help take that burden away, at least temporarily,” Harkins said as he presented the check.

Michael spent four months at Tufts Children’s Hospital. After a series of chemotherapy treatments, he underwent a bone marrow transplant in February. Kent, who is also the guardian of Michael’s brother and sister, spent every night with him in the hospital.

Kent said Michael is now cancer-free and hopes to return to school soon.

Staff writer Paul Leighton can be reached at 978-338-2535, by email at pleighton@salemnews.com, or on Twitter at @heardinbeverly.