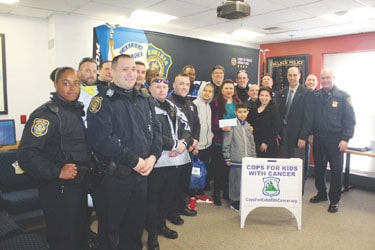 Cops For Kids With Cancer collaborated with the Chelsea Police Department collaborated to present a donation to a local family during a ceremony at the station.

Through a translation by Chelsea Police Officer Sammy Mojica, Sandra Ingles said her family was “very grateful” to the Chelsea Police and the Cops For Kids With Cancer charity for their assistance during this tough time.

Chelsea Police Chief Brian Kyes praised Cops For Kids With Cancer as “a great charity and an awesome program.”

“They go to police departments throughout New England and assist families with children afflicted by this illness,” said Kyes. “They help out these families during difficult times. We thank this organization very much for coming to Chelsea today.”

Captain Mike Drummy of the Massachusetts State Police said families are referred to the charitable organization by local police departments and social workers. The organization has donated more than $3 million to families.