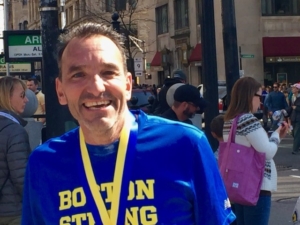 This was taken near the finish line of the race the year following the bombings. My wife, Mary Ellen, was in the finish line grandstand directly across from the first bomb. I’ll try to put together a Bio. But the short running version:
12 Boston Marathons (10 with Cops for Kids with Cancer)
1 Philadelphia Marathon
1 Long Island Marathon
40 NYC Marathons
Total marathons: 54.
A bunch of Half Marathons and shorter races.
I’m running in honor of Ironman Bill Coulter, who was my inspiration for the last 10 Boston Marathons, among many other things. He was a hero to myself and many others. It was an honor to be associated with him and the Boston Marathon group that he has assembled over the years.
100% funded
Hey! I've raised $2,000.00 of the $2,000.00 I'm trying to raise for this campaign!

This donation is in honor of my inspiration, Ironman Billy Coulter!