A tasty summer tradition used to help a good cause 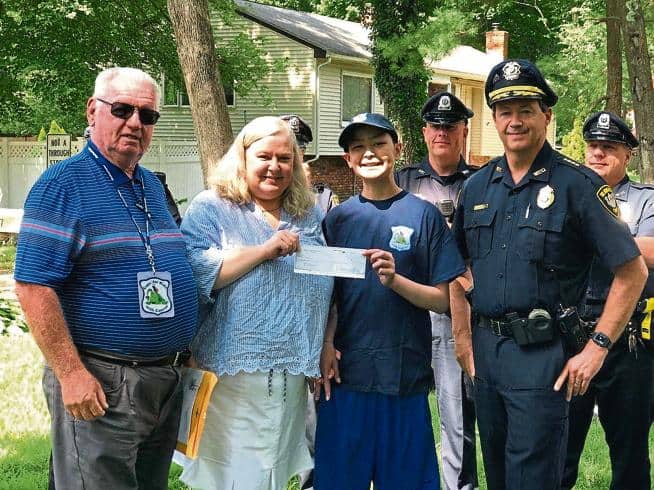 Read more:  http://www.lowellsun.com/local/ci_32738927/tasty-summer-tradition-used-help-good-cause#ixzz5uQykknceWILMINGTON —When five local girls donated their lemonade stand money to Cops for Kids with Cancer, they could not have had better timing.

On Monday, the Wilmington Police Department presented a Wilmington family with $5,000 through the charity — just after Derek Boyd and his daughter Ava Boyd, 7, dropped off $126 that Ava and her friends raised.

“The girls are very generous in that way and very sweet,” said Ava’s father Derek Boyd.

After brainstorming, they settled on donating to Cops for Kids with Cancer. The organization gives families in need $5,000 to put toward whatever they might need, like medications and bills.

Derek is in the law enforcement field and the charity is always fresh in his mind, he said.

On Sunday, the girls set up their stand decorated with homemade signs, a pink cash register and lemons at the corner of Kendall Street and Houghton Road.

Word of the girl’s plans had reached the Wilmington Police Department when Derek inquired on Saturday about donating to Cops for Kids with Cancer. So, when the girls opened their stand a 12:30 p.m., two police cruisers pulled up.

“The girls went nuts,” Derek said. “They were so excited.”

The officers presented the girls with mini-police badges, which they proudly wore for the duration of their enterprise. The visit was the perfect way to kick off their stand’s opening and they spent the rest of the day waving and smiling at every car and pedestrian passing by.

Normally, the department instructs donors to send a check to the organization, Officer Matt Stavro said, but given the department’s plans to present to a family on Monday, they invited the girls to just drop the money by the station.

“What better way to get that money used immediately,” Derek said.

On Monday, 10 police vehicles drove in procession with their lights and sirens activated to the Duong family’s home, where Sheila Duong and her son Zachary Duong, 15, were waiting outside.

Zachary was diagnosed with liver cancer over a year ago, Sheila said. After receiving a liver transplant, Zachary developed additional cancer due to anti-rejection drugs which weaken the immune system.

When Zachary relapsed in February, Sheila had to leave her job to care for him.

This is where Cops for Kids with Cancer comes in.

“Knowing that we have a little extra cushion, it helps,” Sheila said.

The Wilmington Police Department has been working with the organization for several years, according to Stavro. So far the charity has helped seven or eight Wilmington families, Stavro said.

The police procession on Monday was special for Zachary, according to his mom.

“Zachary is really a fun-loving kid who just wants to be a kid but hasn’t been able to be one,” Sheila said.

Wilmington, Sheila said, has been generous in its support.

When Derek and Ava dropped the donation off at the station, Stavro and Derek explained the significance of what Ava and her friends had done.

The experience for the girls was a positive one, Derek said. Next year, they might do it again.

“They did it all, it was just good to be surrounded by good company with friends and watch your kids do something good,” Derek said.