CFKWC and Smithfield Police Station give $5,000 to Antunes family. 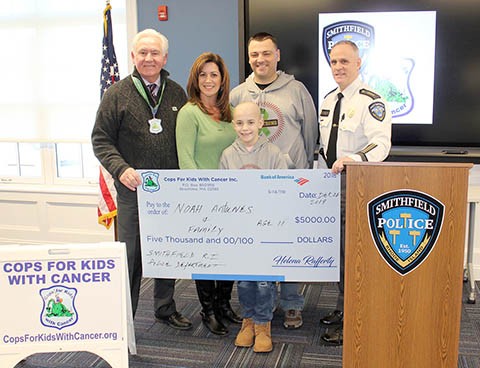 SMITHFIELD – Noah Antunes’ smile never left his face as he arrived at the Smithfield Police Station in a cruiser with flashing lights and sirens to receive a $5,000 check from Cops for Kids with Cancer last Saturday.

His parents, Amy and David Antunes, followed closely behind him with the same broad smile on their faces.

Forever grateful for the support the family received since Noah’s diagnosis of Burkitt’s lymphoma on Oct. 2, the Antunes were overcome with joy at receiving the news that Noah’s recent MRI results revealed he is clear of cancer.

After two months at Hasbro Children’s Hospital, he returned home in time for Christmas on Dec. 23.

His dad said the positive attitude and brave spirit of his 11-year-old never left throughout his three-month journey of chemotherapy treatments.

While Noah doesn’t remember his worst days when he was unable to eat, drink, or talk due to mouth sores, David does.

“It’s been a tough situation to go through,” he said.

The Antunes said the incredible outpouring of support from the community helped immensely in the past months. Seeing #NoahStrong signs around town, receiving a ride with the Fire Department when he came home after his first treatment, and a whiffle ball tournament fundraiser all meant the world to Noah and his family.

Amy and David maintained the Facebook page Noah’s Fight, where the family shared almost daily updates on Noah’s progress. Amy said the kind words and support from the community kept the family going through the tough times.

“We are blown away by the outpouring of support,” she said.

David thanked the Police Department and Cops for Kids with Cancer, and said the gift is “phenomenal.” The nonprofit, organized by Boston Police, gives eight families a $5,000 check to support bills and other costs associated with children battling cancer.

Paul Ivens, of the group, said money for families is raised through events such as No Shave November. He said the group works mostly in Massachusetts and is beginning to give more throughout New England.

Started in 2002, Cops with Kids with Cancer has raised and donated more than $4 million. Ivans said donations are appreciated and can be made at www.copsforkidsiwithcancer.org.

“We are so grateful for all the support we were given. We want to give back,” his father said.

To other children fighting cancer, Noah said to “stay strong.”

Amy said the family is looking forward to returning to normalcy and going back to work. Remission also means returning to LaPerche Elementary School to his 5th-grade class. During treatment, Noah spent hours each day playing the game Fortnite with his classmates. While his skills have surpassed many of his friends, he said he’s disappointed he won’t be able to play games all day.

David said the family is using discretion when deciding when Noah can return to school, which depends on him rebuilding his compromised immune system. Barring any setbacks, Noah will most likely go back sometime in January.

St. Sauveur gave Noah his only duty for the day: signing off on payroll. AsNoah joked about whether he would sign off on the chief’s check, his mother talked about his ever-changing career choices.

Amy said that since through his treatment, his choices have gone from a pediatric oncologist or pediatric surgeon to now professional video game player.

“Or, you could be a police chief,” she said.

The good news for Noah is that he has time to decide, she said.