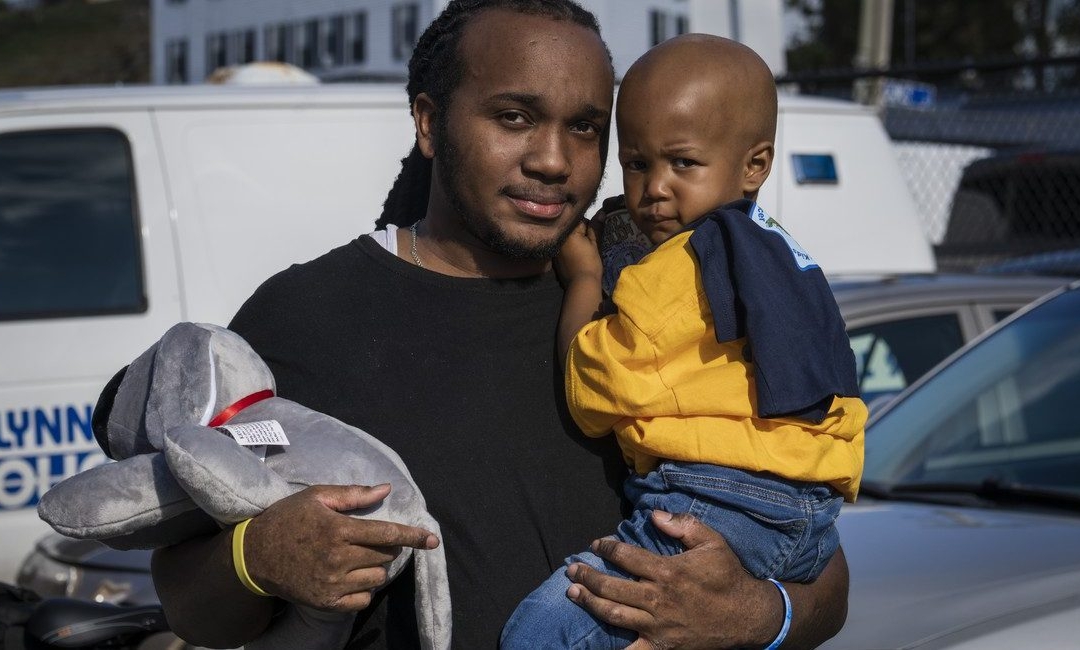 LYNN — The nonprofit organization Cops for Kids with Cancer donated $5,000 to a Lynn family whose 2-year-old son was diagnosed with cancer in August.

Dacian Brown was urgently admitted to Boston Children’s Hospital on Aug. 24 and diagnosed with Stage M neuroblastoma, which indicates that the tumor has spread to a distant part of the body.

Dacian has been in and out of the hospital since his diagnosis, and is expected to face a long, intensive treatment for at least a year that includes chemotherapy, possible surgery, radiation therapy, a stem-cell transplant and immunotherapy.

Between the visits to the outpatient Jimmy Fund Clinic, the frequent trips to the Children’s Hospital, and caring for Dacian’s 1-year-old sister, his parents have been forced to stop working.

His mother, Keiana Christiansen, worked at a daycare in Lynn, and his father, Delvin Brown, worked as a certified nursing assistant, but both had to go on unpaid leave to care for their children.

Boston Children’s Hospital reached out to Cops for Kids With Cancer on behalf of Dacian’s family, explaining what they were going through and the financial hardships that accompanied it.

Cops for Kids With Cancer was able to donate $5,000 to the family, which was presented to them at the Lynn police station following a police motorcade that escorted the family to the station on Friday morning.

“On the way over I was crying,” Christiansen said. “It’s just amazing. It feels really good to have this help.”

Christiansen said Dacian, who will turn 3 in December, has been doing really well since starting his treatment and “has been handling it like a champ.”

He is beginning cycle four of his treatment next weekend.

“He can’t go to daycare anymore and he’s a little more tired than usual some days and he has the nausea aspect, but he’s still playing and being a kid,” Christiansen said.

Christiansen said she and her husband are not able to work because when she takes Dacian to his treatments, her husband has to stay home to watch Dacian’s little sister.

“Dana-Farber (Cancer Institute) has been helping us and now this with the police, it’s really helpful,” she said. “We’re just day-by-daying it. We couldn’t have made it this far without that help.”

Cops for Kids with Cancer has given more than $4 million to families since its inception in 2003. In a normal time, when it’s not a pandemic, the organization gives $5,000 to eight families a month.

The money comes from fundraisers, people running for the organization in the Boston Marathon, a motorcycle run, and donations from police departments and various people.

McNelley said about 95 percent of the money the organization takes in goes directly to families and the only reason that’s not 100 percent is because of post-office charges and other fees.