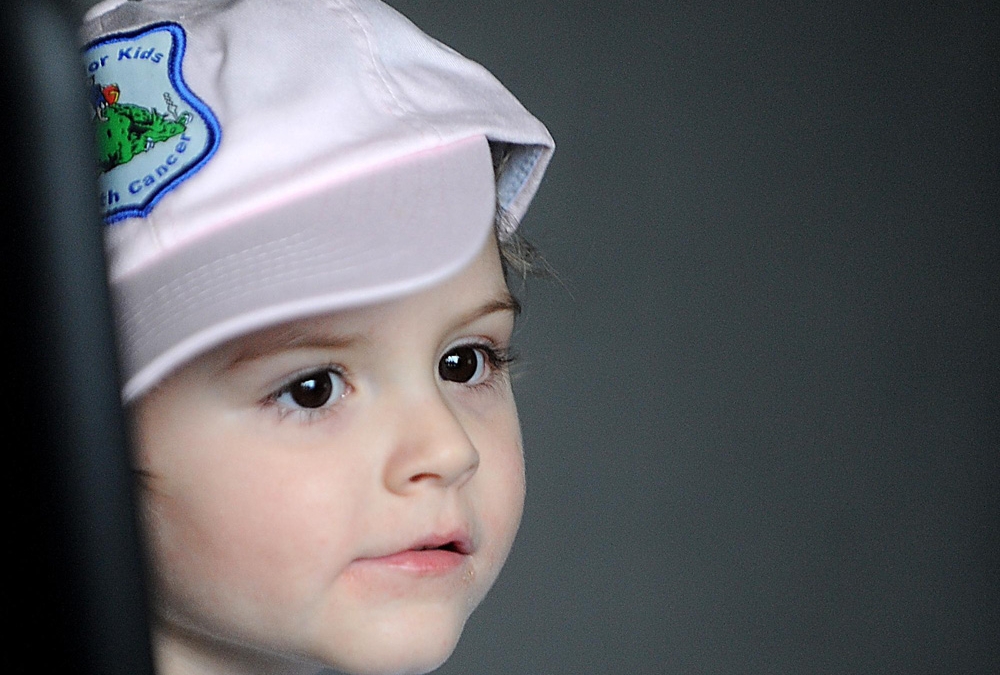 FRAMINGHAM – It’s never easy when a family member has cancer – doubly so if it is a child. Even with health insurance, the costs of treatment and care add up – hospital parking, coffees on the go, co-pays and more.

To make things a little easier, the Massachusetts State Police invited little Adrianna Vaccarello, 4, who is under treatment for acute lymphoblastic leukemia, to their headquarters in Framingham on Tuesday to present her with a bit of that help – about $5,000. The money comes from a charity called Cops for Kids with Cancer, which is funded from donations made by law enforcement officers and others. The program was started by Boston Police in 2002, according to state police Lt. Bill Coulter, organization chairman.

For her part, Adrianna was mostly just excited to visit the HQ and get some neat swag, including teddy bears, state police hats and T-shirts, a Boston Police badge and a Cops for Kids with Cancer bumper sticker. Little sister Victoria, 2, was showered with gifts as well.

Initially, the organization donated to hospitals, but around 2007, it began donating directly to families.

Police across the state constantly work to raise money, holding charity drives and events including bake sales, golf tournaments and comedy nights to raise money to donate to about six families per month, said Coulter.

Coulter said the organization has raised about $2.5 million to date, but treat every approximately $5,000 donation like it’s the only one.

“The only one we care about is the one today,” Coulter said.

Coulter said the money is to primarily help with co-pays or other finances that parents incur – something with which Coulter, as a former cancer patient himself, has experience.