Cops for Kids’ Donates $5,000 to Toddler with Cancer 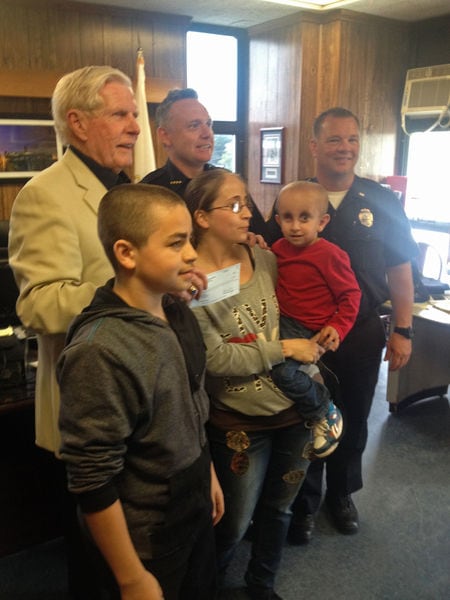 LAWRENCE — A 21/2-year-old Lawrence boy has $5,000 more in his fight against pediatric cancer.

Daniel Gierbolini Jr. was diagnosed with bilateral retinoblastoma in March and has already lost his right eye to the cancer. Retinoblastomas, which develops rapidly, are the most common malignant eye tumors in children.

Yesterday, the non-profit charity Cops For Kids with Cancer gave Gierbolini $5,000 to aid him and his family in the fight against cancer.

A small check cashing ceremony was held in the office of Interim Lawrence Police Chief James Fitzpatrick at noontime.

Robert Faherty, a retired Boston Police Superintendent who chairs the Cops for Kids with Cancer board, handed over the check to Gierbolini’s mother, Brittany Oakes.

Meanwhile, Gierbolini happily darted around Fitzpatrick’s office, greeting visitors, chatting with police officers and playing with stickers and patches he was given in a gift bag.

Cops For Kids With Cancer is an organization comprised of current and retired police officers that provide up to $5,000 to families with a child battling cancer. The charity pays no salaries and all donations go directly to families in need to cover expenses and care associated with their child’s cancer treatment.

This is the third donation Cops For Kids With Cancer has made to a Lawrence child in the past three months, Fitzpatrick noted.

Oakes said she was extremely grateful for the donation. She said the majority of the check may be used to pay for her son’s prosthetic eye, which will cost between $3,000 to $3,500 and insurance will not cover.

Gierbolini is being treated at Dana Farber Cancer Institute in Boston. Money is always needed for gas, parking and food when they travel to the hospital for appointments.

To finish off his special day at the police department yesterday, Gierbolini and his mom and brother, Damian, 12, were given a ride home in a Lawrence police cruiser.