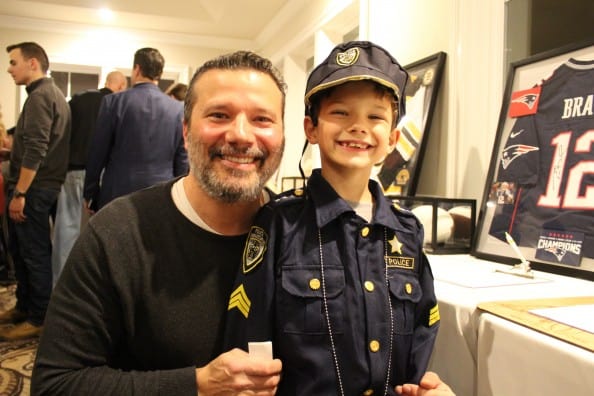 Last year, $75,000 dollars was raised for local families in need.

“Seeing the community come together for a common cause, for the good of children, is my favorite thing,” said Tavares. “It’s just, the overwhelming support that we have here in Marshfield is just what makes Marshfield the best place in the world to live.”

With food, raffle prizes, and live music, it was an entertaining night for the cause.

Amid the volunteers clad in blue was Lieutenant Dorcy McGinnis, from the Conroe Texas Police Department. After hearing about the event from Marshfield Police Lieutenant Arthur Shaw, she wanted to see it first-hand.

“The organization and the town commitment to this event are amazing,” said McGinnis. “Maybe Lieutenant Shaw can come to help us, teach us a few things.”

It was the second year the event was held at Haddad’s.

“It’s such a worthwhile event, they do such good work for the kids in need, everything they do is on a volunteer basis,” said Chuck Haddad, the owner. “One hundred percent of what we make goes back to someone in need.”

Families are given $5,000 to spend however they want. Whether it’s for a vacation, parking, or other expenses.

Retired State Police Lt. Colonel Tom Grenham, a Director of Law Enforcement for the MSPCA, says about eight families are helped each month.

The cause means a lot to Grenham, as his now 16-year-old daughter was diagnosed with leukemia when she was three. She was among the volunteers at the event on Thursday.

“It’s amazing how it has taken off here in our community. Between the businesses, the people that live here and the surrounding towns. They’re so generous and they’re so supportive,” said Grenham. “I can’t put into words how excited it makes me. It’s a lot of work, but it’s worthwhile when you give that check to the family and know you’re helping them out.”

More information can be found at CopsforKidswithCancer.Org. Checks can be dropped off at the Marshfield Police Department.