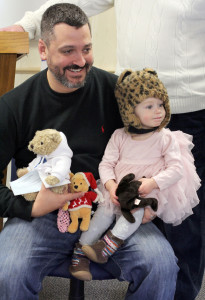 NAHANT — Cops for Kids With Cancer presented the Martineau family with a check for $5,000 at the Nahant Police Department Tuesday.

Nineteen-month-old Mila Martineau was diagnosed with a form of cancer known as embryonal rhabdomyosarcoma in January after her parents, Jessica and Mark Martineau, noticed a lump on her back in late December.

“It was the size of a lemon on her back,” said Mark Martineau. “It seemed to have appeared almost overnight.

“(Doctors) said her type of tumor is very aggressive,” he said.

Mila underwent surgery to remove the tumor in January. Following her surgery, Mila began her next phase of treatment, which involves weekly chemotherapy treatments at the Jimmy Fund Clinic in Boston.

“They removed it all,” Mark said. “We’re lucky we live near the best.”

Jessica said she is moved by her daughter’s strength and resilience.

“Her rebound rate is ridiculous,” she said. “She will be sick, and then, all of the sudden, she’s playing.”

Jessica said Mila was running around and playing shortly after waking up from surgery.

“Her prognosis is positive,” Mark said.

Mila is one of three of the Martineau’s daughters. She has an identical twin sister, Ava and an older sister, four-year-old Presley.

“Day to day life is tough,” Mark said. “With Presley coming home from school every day, she can’t be sick. But Mila is a warrior.”

Mark, originally from Salem, and Jessica, from Gloucester, bought a fixer-upper and moved to Nahant, two-and-a-half years ago, while Jessica was pregnant with the twins, Mark said.

“My wife wanted to live near the ocean,” he said.

Mark said he and Jessica were approached by a friend who is a Boston Police Officer, who had already filled out the paperwork for them to apply for help from Cops for Kids With Cancer.

Cops for Kids With Cancer is a Massachusetts based nonprofit organization that benefits families of children battling cancer. The organization was founded by John Dow, a retired police captain and cancer survivor.

“In 1980 he had lung cancer and was cured,” said Robert Faherty, chairman of the Cops for Kids with Cancer board and retired superintendent-in-chief of the Boston Police Department. “He said how devastating it was for him as a grown man to have cancer, he couldn’t imagine (being) a child with cancer.”

Dow began donating funds to families of police officers and giving the remainder to other families of children with cancer who needed it, Faherty said.

In 2007, Dow died and left the organization to Faherty and the Board of Directors, which has since grown to include more than 20 members.

“We try to do six families (each) month,” he said.

“The toughest kids I’ve ever met in my life are the kids (fighting cancer),” he said.

“This is amazing, what you guys do,” Mark said.

“Mila is a warrior,” said Jessica on the Team Mila Facebook page. “We intend for her to win this battle and move on with her life.”

Donations to the Martineau family can be made online at www.GoFundMe.com/TeamMila.

Donations to the Cops for Kids with Cancer organization can be made at www.CopsForKidsWithCancer.org.