Rockland: Police Chief John Llewellyn is Running the Boston Marathon for a Cause 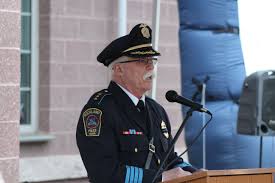 With the Boston Marathon approaching, WATD is highlighting local runners and the causes they support.

Rockland Police Chief John Llewellyn is running the marathon to raise money for Cops for Kids with Cancer.

“I’ve been in this business for 31 years now,” said Llewellyn. “I can’t think of a better organization to raise money for.”

“It was always a lifelong goal to run a Boston Marathon, to me, it was just one of those ultimate achievements,” said Llewellyn. “I think the first time I ran it, about halfway through I had an emotional meltdown because I knew I was realizing a lifelong goal. I knew at that point I was going to be able to finish. I was never quite sure if I could run 26.2 miles.”

Llewellyn will be running this year with his wife, Officer Susan Llewellyn, their third marathon together. Officer Llewellyn is running to support the Calvary Chapel Group.

“I’m not looking forward to running 26.2 miles, but I know the cause, the motivation,” said Chief Llewellyn. “In the middle of it, when I start feeling sorry for myself, I’ll know this is for a bigger cause.”

Cops for Kids with Cancer donates $5,000 to a family with a child that has been diagnosed with cancer.

“There is probably not one of us that hasn’t been touched in some way by cancer. Those of us that have children, I cannot imagine anything worse than being told that your child has cancer,” said Llewellyn. “I’ve seen the charity come to Rockland on four occasions. I’ve seen the difference that it makes in a family when they write them that check. The joy of the child coming to the police station, getting a teddy bear, getting recognized. The parents, the relief on their face knowing that this is going to help them.”

Chief Llewellyn’s Cops for Kids with Cancer page can be found here.