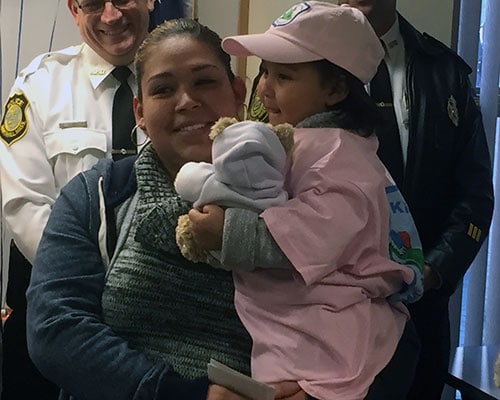 “What we have noticed is that when a family has a child that is stricken with cancer, usually the husband, the mother or both either have to stop working or cut back on their hours, creates a financial burden.” 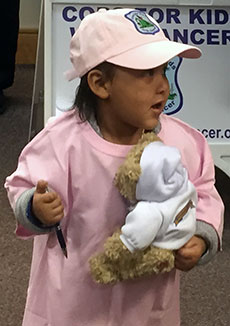 The girl, who turns four Feb. 21, was nominated for help by a family friend who called the Jimmy Fund. Since its inception in 2002, Cops for Kids with Cancer has donated $2.5 million to families with children stricken with cancer. McNelley said the group gives $5,000 each to six families a month.

“Knowing that the last several months probably have been trying on you emotionally and financially, Cops for Kids with Cancer and the Haverhill Police Department wanted to try to assist you with a financial donation.”

Yiandry is being treated at Dana Farber Cancer Institute. Her mother, a single parent, said she had to leave her job because her daughter couldn’t walk during the early stages of medical care.

“She had radiation for six weeks and now she’s going through chemo and experimental treatment.”

Yiandry was presented with balloons and toured various police vehicles. She seemed to like the sirens best.