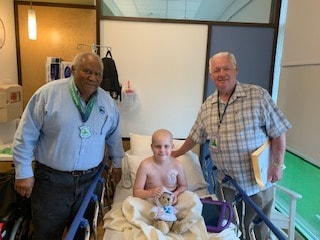 BANGOR, Maine (WABI) – A young boy took a tour of the Bangor Police Department today, his family was then presented with five thousand dollars.

The money comes from “Cops for Kids With Cancer,” a charity based in Boston. It was started in 2003 by a former police officer and has raised more than three and a half million dollars to help families- so far helping 650 families throughout New England.

Chandler is the first recipient from Eastern Maine.

“They’re going through a tough time right now, this family. It’s not one of them things where you can say, you know, ‘I know what you’re going through’ because you really don’t know what they are going through,” said Ed McNelley of Cops For Kids With Cancer. “And $5000 might not seem like a lot of money, but to a lot of people, it is a lot of money. Can they afford their rent? Can they afford food? So, it’s a big issue, and at the end of the day, that’s what it’s all about. It’s all about that little boy Chandler.”